skip to main | skip to sidebar

The Catch of the Day: snacks wrappers from the 1980's 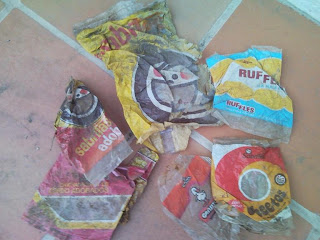 So this afternoon I was doing some jogging at a park near home (northwest Mexico City), and while I was running it seemed to me to have spotted a "Ruffles" potato chips wrapper from the 1980's... it was very odd. I picked it up and yes, it was a vintage wrapper!. It seemed one of the hills of the park used to be some sort of landfill 30 years ago and some of the earth had moved revealing what I would call "contemporary archaeology". Me being an advertising items collector headed towards the hill for more trash-hunting finding one wrapper of Sabritas original (Sabritas is the frito-lay trade brand in Mexico), one wrapper of Sabritas adobadas (spiced), one wrapper of Ruffles (the one that brought my attention), one wrapper of Cheetos, two wrappers of Gansito Marinela, a very popular choco-cake in Mexico from the multi-billion giant Bimbo, one peanut bar wrapper from Mafer (now owned by Pepsico too) and a Chicharrones (pork skins) Barcel wrapper. It was exciting to find these wrappers because they brought back memories from my childhood, but the message was far more shocking: these wrappers were almost intact and they've been buried for 30 years! Recycling in those times were unimaginable, not to say bio-degradable packaging. Certainly these wrappers are an example for future generations about how much garbage human kind can generate. 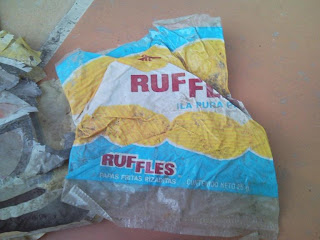 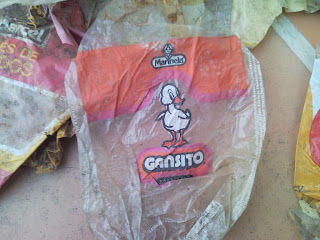 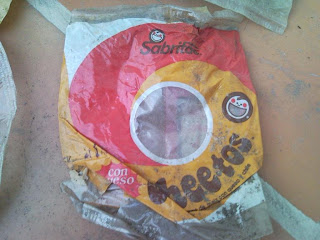